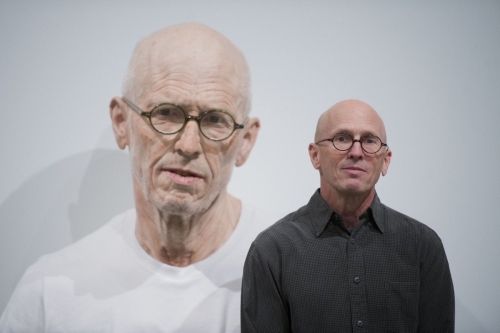 Evan Penny was born in South Africa in 1953, and immigrated to Canada in 1964. In 1975 he graduated from the Alberta College of Art and Design, Calgary with an Honours Fine Art Diploma. Two years later, he returned to the Alberta College of Art and Design and completed Post-Graduate studies in sculpture. From his earliest sculptural busts in the 1970s through to his first nude sculptures in the early 1980s, Penny has devoted himself to an examination of how the concepts of sculptural realism have been influenced by classicism, romanticism, and - most importantly for the artist – by the advent of traditional and digital photography. Over the past fifteen years Penny has stated that his interest has been to explore the discrepancies between the way we might experience each other in real time and space and the way we might imagine the equivalent in an image.

Interested in the terrain between the “real” and the “replica”, Penny makes twice-life sized or larger renderings of human heads and bodies out of silicone, pigment, hair, and aluminum, magnifying the details and subtleties of the human skin.  To stand in front of one of Penny’s sculptures is to be mesmerized and unsettled by the lifelike human form staring back at you. The artist pushes the boundaries of representation between the two-dimensional and the three-dimensional. At a time when few artists have found a way to make figurative sculpture in a contemporary way, Penny has created a radically new vision of figuration and sculptural practice set against the backdrop of photography. He incorporated what might be seen as the mistakes of digital photography—double exposure, depth of field, blurring, achromaticism—into a vocabulary of sculptural realism that results in visual distortion in three-dimensions.  He says, “My interest is to situate the sculptures perceptually between the way we might see each other in real time and space and the way we imagine our equivalent in a photographic representation. The intention is that the work be seen in a context where the sculptural and photographic images, mirroring each other, subtly shift, confound, and inform anticipated readings.”  The results are human forms that are stretched, blurred, and manipulated in space while maintaining their meticulous detailing and sculptural veracity.

Over 30 years, Penny’s work has transitioned from sculpture and digital photography to 3-D imaging and reproduction. He believes that “the real can't be represented or symbolized,” leaving everything to be a representation. He forecasts age-development through how subjects are represented, accentuates variability in features or body parts, and distorts seemingly realistic features to theoretically examine human relation to the world. Penny has exhibited at the world's most important art fairs, including Art Basel, Basel, Switzerland; Art Basel Miami Beach; Hong Kong International Art Fair; Tefaf Maastricht; Frieze Art Fair; among many others. His work is in the public collections of the National Gallery of Canada, Ottawa; Columbus Museum of Art, Columbus, Ohio; Albright Knox Gallery, Buffalo, New York; National Portrait Gallery of Canada; Art Gallery of Ontario, Toronto, Ontario; Museum of Contemporary Canadian Art, Toronto, Ontario; among others. He has enjoyed solo and group exhibitions at the Art Gallery of Ontario, Toronto, Canada; Columbus Museum of Art, Columbus, Ohio; Walker Art Center, Minneapolis, Minnesota; New Orleans Museum, New Orleans, Louisiana; among others.