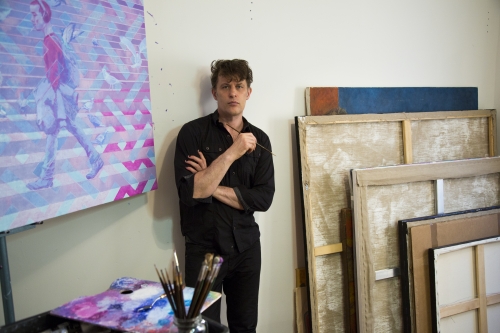 Jakob Bokulich (born 1974, Santa Cruz, CA) is a multi-disciplinary artist working primarily as a painter. He has been exhibited and collected in California, Europe, and New York since 1992, with seven solo shows and over 20 group shows. His work is in the collection of the Croatian Embassy in Paris, and he was awarded an Honorarium grant in 2018 by Burning Man for his 23 foot-tall kinetic sculpture, which was six years in the making and involved the work of over 100 volunteers.

An essentially self-trained artist, Bokulich first began painting in oils after a house fire left his family homeless, and he stayed temporarily with a painter who inspired him to begin painting at the age of 12. His artistic career began young, at 17. After a nearly sold-out show in Santa Cruz, he left on his own to Europe, painting and exhibiting his work in galleries and pop-up shows in Paris, Saint-Tropez, Chamonix, and Split, Croatia. At times living in art squats and on the streets, his wartime experiences in Croatia between 1993-1995 - as well as his exposure to the work of Joseph Beuys - eventually led him to eschew the gallery system and pursue the concept of “social sculpture”.

Taking a hiatus from painting, he explored how to make art both more accessible and socially relevant. He immersed himself in building art communities in San Francisco and Oakland, including the Artship, a 500-ft ship built in 1934, which he worked to convert into an art center in Oakland. His piece Red-Blooded American gained notoriety in San Francisco, and with FIGHT he invited his audience to question the definition of art, competing in the Golden Gloves as a boxer (he won runner-up). He made a film as a conceptual art comedy, where he played Bob Ross attempting to make a drawing of Rauschenberg’s Erased DeKooning Drawing. He explored performance and ritual, eventually leading to film, which led him to spending time in Los Angeles as an actor and filmmaker in his pursuit of an accessible, multi-media art form.

Bokulich moved to New York in 2015 and returned to painting, as well as kinetic sculpture. His work is informed by his experience in film (from large Hollywood sets to filming in remote areas in Africa and Asia), meditation, his involvement at Burning Man since 2000, and years of investigating the nature of art. Often autobiographical, his work observes the contemporary human experience, pairing the analytical with the emotional, the structured with the intuitive. He views his paintings as a medium to reinforce seeing, in an era in which he feels the senses have become dulled.