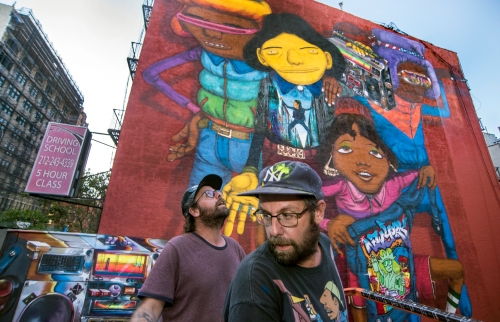 Os Gêmeos is a Brazilian graffiti-artist duo notable for their large-format paintings of yellow figures. Blending influences of Brazilian folklore, hip-hop culture, political commentary, and personal history, many of their murals and paintings are centered on characters in a self-made fantasy world called “Tritez.” Born Otavio and Gustavo Pandolfo in 1974 in São Paulo, Brazil, Os Gêmeos is a moniker (translated in Portuguese as The Twins). The brothers started their artistic career as break-dancers, before becoming interested in American graffiti culture after an encounter with the artist Barry McGee in 1993. Their work uses a mostly yellow palette, as the color is easy to see from a distance on the street. Their rise to prominence has been meteoric, their murals plastered on structures throughout the world, including in Coney Island, NY and on Brazilian subway trains. In 2012, the pair had a solo exhibition “Miss You” at Prism gallery in Los Angeles, CA. Today, they live and work in São Paolo, Brazil.