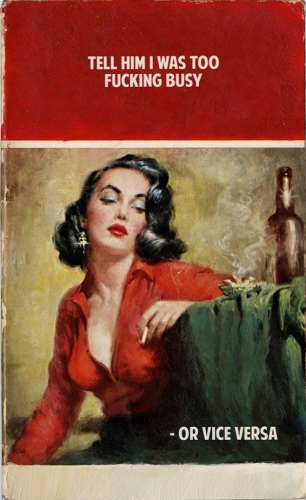 Chase Contemporary is pleased to announce A Dangerous Idea, its first exhibition with British artists The Connor Brothers. In partnership with British brand Maddox Gallery, the exhibition will be the artists’ first solo exhibition in the United States. A Dangerous Idea will be on view from January 31st through March 3rd, 2019. An opening reception will be held on Thursday, January 31st, from 6-8pm at 231 10th Ave in the heart of Chelsea, New York.

The exhibition will feature a selection of new works from 2018, including oil on canvas paintings, hand-painted works on paper, editioned collage works, and hand-painted vintage books. The new work is executed in the artists’ signature style of witty proverbs superimposed over motifs taken from historical pop culture. One painting incorporates a pithy aphorism, “Truth is weirder than any fiction I’ve seen,” painted over a mostly grey-scale, film noir image. The works are at once cinematic and literary, playful yet sinister, and insightfully relatable.

Best known for their Pulp Fiction series, the pair are also known for their activist work and their playful hoaxes. In 2014 they created a fictional museum, The Hanbury Collection, which fused truth and fiction in such a way as to render it impossible to work out which exhibits were real and which were not. This obsession with truth and fiction can be seen throughout their work, and is particularly relevant in the current climate of fake news, post-truth and social media obsession. 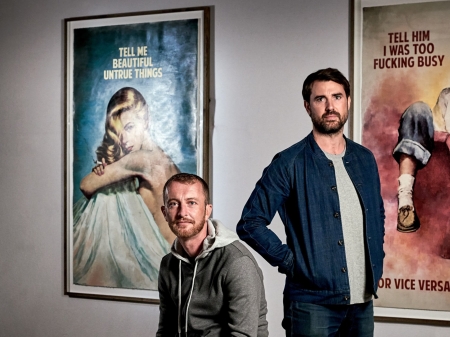