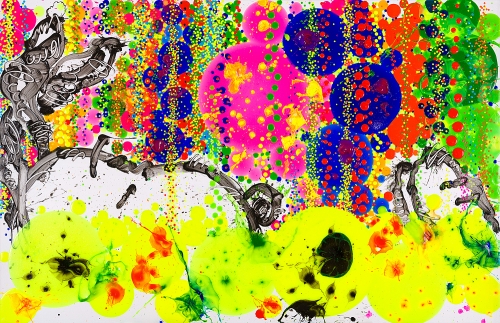 Sleeping Beauties / The Have Mercy Paintings,” asked the question; “what and why haven’t we learned.” The question is referring to such sensitive topics as equality, discrimination, gun violence, and vulgar politics.

Tom Everhart’s works are both familiar and new. Using cartoon characters in his art, Everhart utilizes the instantly recognizable image of Snoopy to communicate a new sensibility – one that is at once accessible and exotic. Working alongside the likes of artists such Andy Warhol and Jean-Michel Basquiat in the 80s of New York, he then became fascinated with the “brilliant architecture of Schulz’s black ink line,” and its potential for monumental shifts in tone and scale. From the early expressionist slashes of his works, to the prismatic dot, to the sculptural tendencies of his most recent art, Everhart has an unmatched eye for color and a willingness to experiment with textures and surfaces. Everhart’s work has been exhibited in Museums including the Louvre (Paris, France), Museu da Cidade (Lisbon, Portugal), Suntory Museum (Osaka, Japan), and the Charles M. Schulz Museum (Santa Rosa, CA).