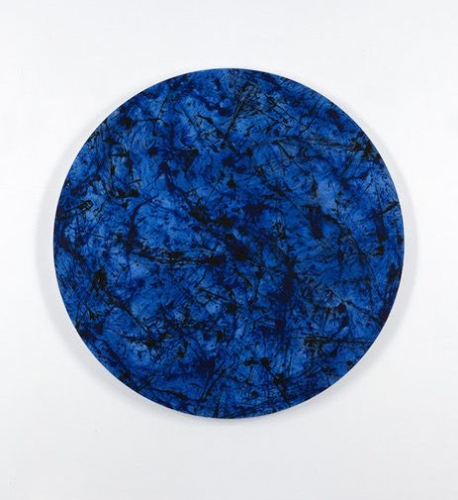 Chase Contemporary is pleased to announce Two Doors Down, a two-person exhibition with abstract painters and artist couple Stanley Casselman and Hallie Hart. The show will reveal Stanley Casselman’s new Liquid series, reflective acrylic paintings coated in silver nitrate, along with action-painter Hallie Hart’s new round paintings, a series of atmospheric sphere-shaped canvases. The exhibition will run from April 4th- April 28th, 2019. An opening reception will be held on Thursday, April 4th, from 6-8 pm at the gallery’s 521 w. 23rd street location.

Casselman’s new liquid series is the latest development in his practice of painting on polyester screen. Casselman has experimented with polyester screen, typically used for silkscreen printing, for over thirty years. His works are created from the backside of the screen by pushing paint in the direction it’s to be viewed. Working in such a fashion, Casselman has pioneered a host of unique surfaces. Casselman’s technique includes throwing, splashing, pouring and then manipulating the resulting mass with a squeegee. The Liquid paintings are made with an additional layer of silver nitrate (spray chrome) creating a mirror-like surface.

The concept of gestural expressionism showed Hallie Hart a way to channel the life force and methodical chaos of everything happening around her into paintings. Aligning with several elements of Pollock in his conceptual and physical approach to picture making, Hart works with a canvas on the floor, using only her hands to manipulate, flick, splatter or throw paint. Further defining Hart’s unique practice is her use of catwalks, some spanning eight meters in order to get in the middle of her action painting process.