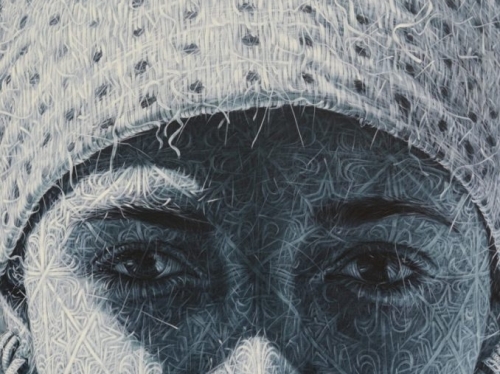 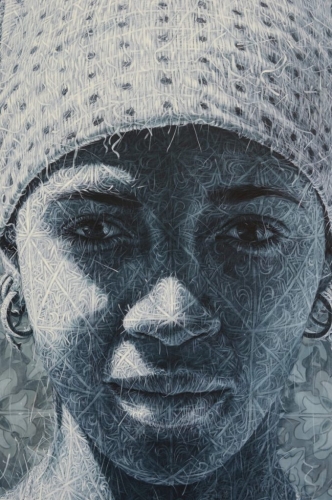 Artist Alexi Torres is a trans-national Cuban immigrant whose large, subtly surreal portraits represent his vision of the human experience. His story begins in Cuba, where history has been dictated by the principles of political rhetoric, its effects on the economy, and its influence over the moral landscape. Torres’ body of work is a thoughtful and emblematic homage to the inheritors of this history, and uses metaphor and symbolism to create a dialogue of empathy. The flesh of his subjects appear to be made of a tightly woven fabric, which he explains is inspired by traditional weaving techniques passed down by previous generations. Currently on view at UNIX Gallery in New York, “Sun Light” is an exhibition of Torres’ portraits of everyday Cuban people. With recent developments made in U.S. and Cuban relations, these paintings serve as a timely reminder of what is really at stake in this cultural clash. Beyond predictions of the chintzy, capitalist invasion of timeless Cuba, we find the lives of people who endured the extremes of a totalitarian regime, as well as a younger generation living through a new phase in Cuban history. We spoke with Torres to learn more about how his work is inspired by his heritage and informed by his humanism.

Where did you grow up?  When did you move to the U.S.?
I grew up in the small rural village of Bermeja, Cuba, about 70 miles southeast of Havana. Most of the population is made up of farmers who plant and harvest their crops on the waning moon. To be in harmony with my people and our ancestors, I begin and complete each painting according to the same lunar pattern. When I immigrated to the United States from Cuba in 2003, my entire worldview transformed. The strict and regulated lifestyle of living under a communist regime left little time or energy for spiritual or philosophical reflection. Over the last 13 years I have enjoyed the benefits and freedom of living in a democracy, which has allowed me to explore a variety of themes related to the interconnectedness of all creation. A visual representation of this is seen in the multi-layered basket weaving techniques I use to create my work. 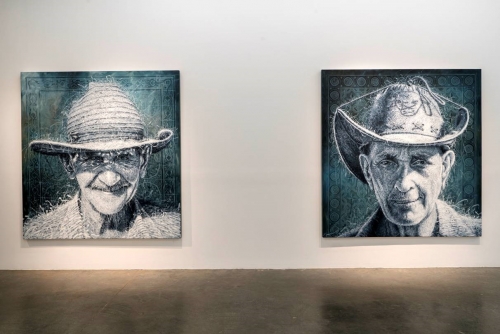 It seems your artworks reflect much of your native culture.  How has your hometown inspired your creative process?
The rural practices that my father instilled in me run deep. As a young boy I was forced to take on more responsibility than other kids my age, working early and interacting with adults on a professional level. Ultimately, this taught me to appreciate the important things in life, and to rise above the manipulative aspects of institutional politics, religion, etc., which purport to help, but in reality stifle individual freedom. I began to look at the world’s macro issues and how they related to the present circumstances in Cuba. I wanted to show people how interconnected we are, on a physical and spiritual level, with each other and with nature. Everything is woven and knitted together—past, present, and future, along with people, politics, environments, and religion.

As an artist, who inspired you? Who do you admire?
Many people, including individuals outside of the art world. I find the most inspiring people are those who change the way we live by bringing about creations which improve the development of our species. People like Steve Jobs, Ralph Waldo Emerson, and Eckhart Tolle come to mind.  Spiritual thinkers, hard workers, artists, and anyone who has pushed to accomplished greatness outside of their own self-interests. 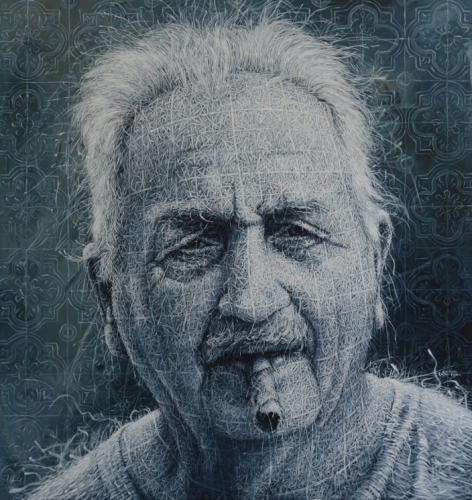 What has been your greatest challenge so far?
Leaving my home country. Not just the physical aspect of uprooting, but coming to conclusions that contradicted what I was taught in school, or what was the prevailing national truth in Cuba at that time. At the age of 27 I realized that most of what I was exposed to in Cuba were lies. This was challenging, but it taught me how to be present, that my thoughts do not control me, but the other way around.

You are very well recognized for your large-scale depictions of international cultural icons.  However, in your current solo exhibition “Sun Light” at UNIX Gallery, you seem to have deviated from this approach. Can you tell us more about this?
Yes, I have a series of large-scale portraits featuring celebrated icons, including Muhammad Ali, Ernest Hemmingway, Marilyn Monroe, and others. They played a large role in my initial encounter with U.S. culture, and in them I saw the interconnectedness between them, us and human nature. But, after President Obama announced the reestablishment of relations with Cuba, I decided it was a great opportunity to bring forth the true reality of the men and women of my country, knowing that their lives will not change as long as Castro’s regime is still in power. I decided to make a series of paintings that portray Cuba’s people and their realities, which you can see in their facial expressions.

What are you working on at the moment?
I am working on a new series entitled “Spiritual Security.” This series depicts firefighters, police officers, and members of the armed forces engaging in peaceful and loving activities—including prayer, meditation, and merriment. My intention is to humanize these heroes by depicting them engaging in everyday, accessible, and unofficial activities as a way to honor them, their families, and their service. These fallen heroes have given everything, not just because of their duties, but because of their aspirations, courage, respect, joy, and love. These are things through which we as humans can connect.