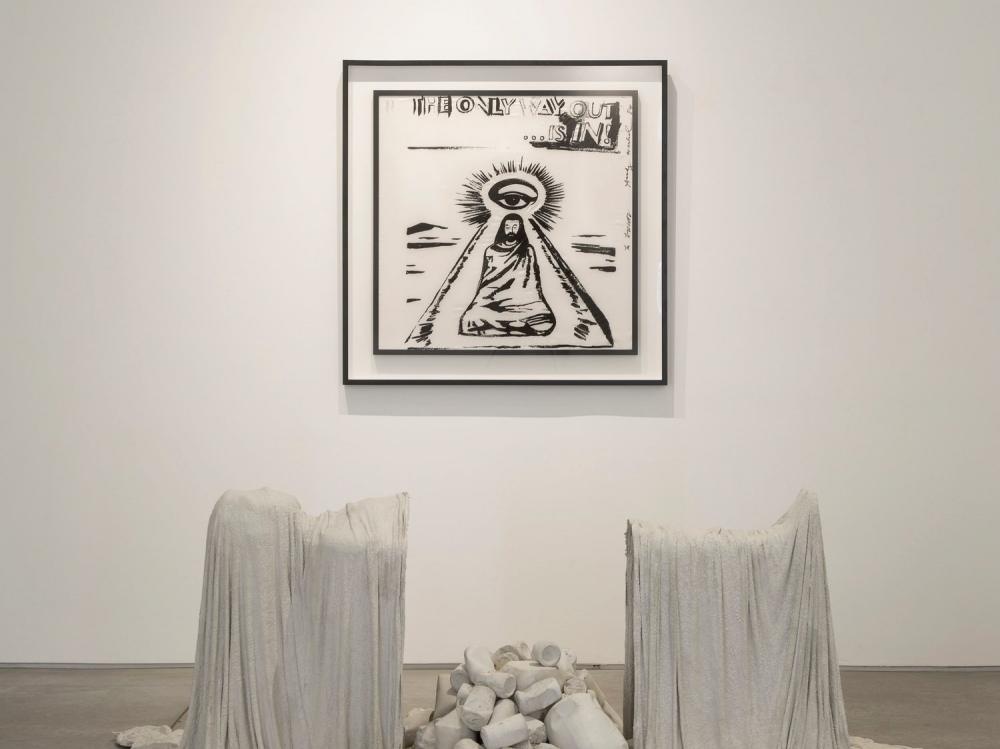 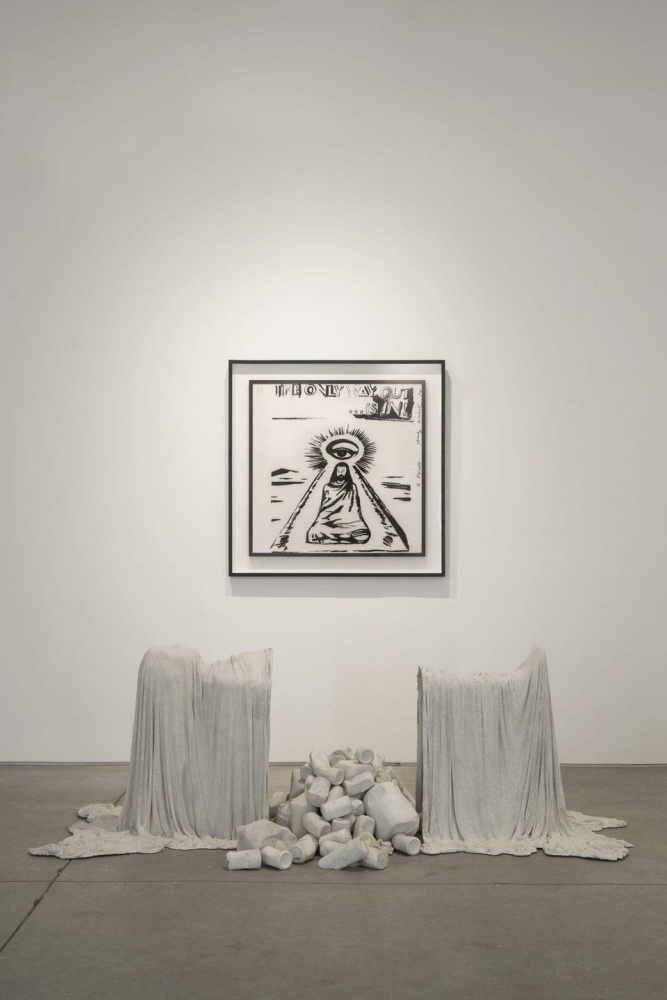 Thirty-five years after Andy Warhol created his ominous and intriguing black-and-white The Only Way Out is In! screen print on silk scarf, it seems as if he collaborated with Steve Hash to hang it just above the new (2019) and newly installed concrete-drenched cotton toweling sculpture Figure No. III (Void).

“It all happened when I showed up in Miami, and Bernie (Chase) showed up and bought some of my works and said ‘Let’s do a big show,’” said the Los Angeles-based artist at a private preview Friday hosted by Tommy Hilfiger. “I said ‘Let’s do something different. Let’s do something bigger than that.’ As an emerging artist, I was looking at a massive artist, one of the biggest in the world, and his later works just speak to me.”

The two­-person exhibition curates Hash’s innovative sculptures alongside late black-­and-­white paintings and works on paper by Warhol. Hash, who is color blind, works monochromatically and is especially drawn to Warhol’s final years.

"I first saw Steve's work at Art Miami 2018 and bought two sculptures there without having any idea who he was. I simply enjoyed the work. This project came together quite quickly and we had a wonderful team behind us,” gallery owner Chase says. "It's been an absolute pleasure to work with Steve and his wife Ally. I'm thrilled with how the exhibition turned out."

Both artists grew up in poverty with deeply religious influences, which are simultaneously subtle and obvious in their work.

Hash’s Pity I (Plank), a concrete-draped figure supported by a simple wooden plank, evokes both Pietà by Michelangelo, as well as the 1973 post­-minimal sculpture by Charles Ray.

A devout Byzantine Catholic, secretly, throughout most his life, Warhol was born in Depression-era Pittsburgh to parents of an ethnic group known as Ruthenians, from a village in the foothills of the Carpathian Mountains, at the northern border of the Austro-Hungarian Empire.

Hash was born in 1982 Santa Barbara, California, and raised in De Soto National Forest, in a radicalized Christian community in rural southern Mississippi, the son of a construction worker. 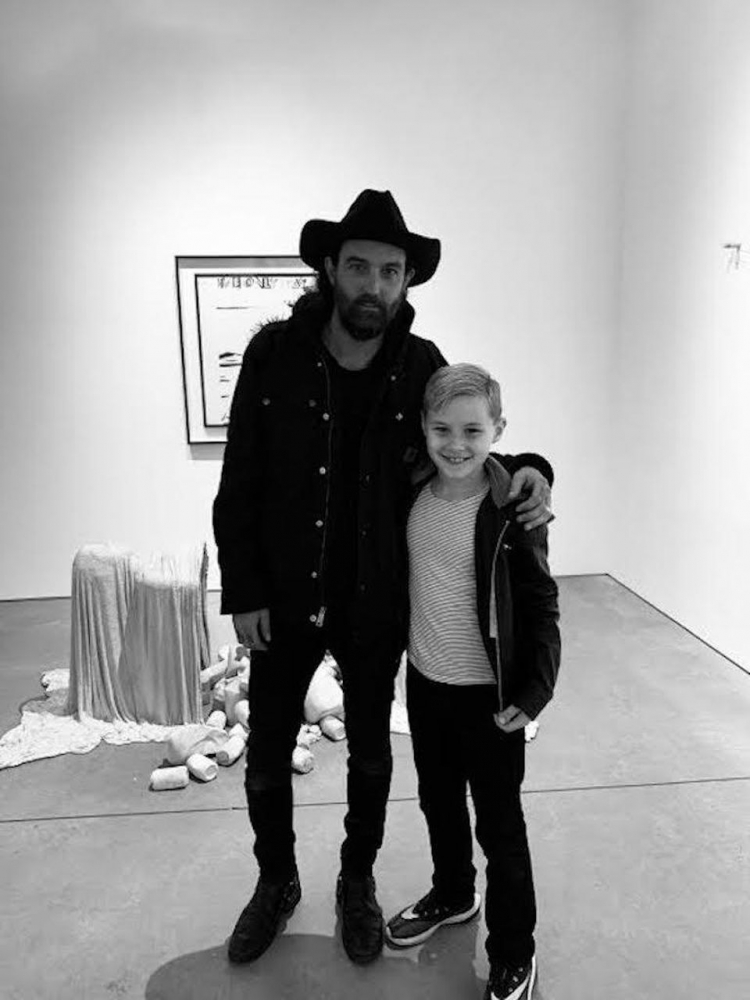 Hash said his fascination with Warhol “started as a personal exploration. I grew up in poverty. I grew up in religion. A lot of my work is trying to continue a conversation of art history. And the hunt (for late, black-and-white Warhols) began, and it all came together. Bernie and Chase went on a heroes’ journey for me. Bernie and Chase jumped off the cliff for me.”

Hash moved to New York to work as a creative director for a major record label, and now lives and works as an artist in Los Angeles, with his wife, Ally Hilfiger, and their daughter, Harley. He made his 2018 debut at HILDE Gallery in Los Angeles, earning a Critic’s Pick review in Artforum. He has exhibited at the Bombay Beach Biennale, Marfa Invitational, and the Institute of Contemporary Art in Los Angeles. His Mother I and Child I sculptures were awarded a Director’s Choice at Art Miami 2018.

Down-to-earth and eager to explain his creative process and inspiration, Hash says: “My work isn’t about me, it’s about the interaction” with the viewer. He humbly and willingly took time to chat with 9-year-old Michael Alexander about his ongoing conversation with Warhol.

Chase Contemporary was established in 2017 with two locations in Manhattan’s Chelsea. The gallery’s core program is to exhibit both hotly sought-after fine art as well as work by emerging and mid­-career artists, catering to both the established and the entry level collector.

The gallery regularly hosts artist talks and lectures, events, and benefit auctions, and participates in major art fairs. View the Hash-Warhol exhibition at the space on 521 West 23rd St. until May 26.