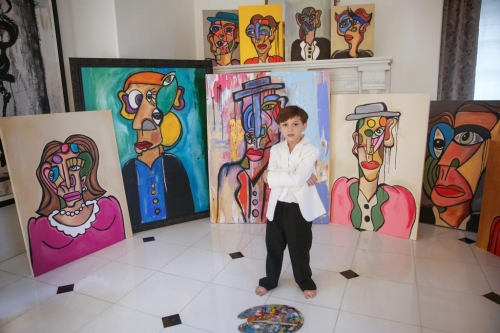 Andres Valencia (b. 2011) is a San Diego, California-based contemporary artist known for large, dramatic, colorful figurative paintings that are deeply influenced by George Condo, Picasso, and Cubism. A third-grader who has been painting since he was about five years old, Valencia stands on a step ladder to create large-scale works with a mix of oil stick, and oil and acrylic paint, seeking to create bold colors and wildly imaginative fragmented facial compositions. Teachers involved in his California public school Visual and Performing Arts (VAPA) program quickly identified his extraordinary talent. Surrounded by art at home, Valencia is inspired by RETNA, Richard Hambleton, Raphael Mazzucco, Salvador Dalí, and other artists his father began collecting about seven years ago. He’s collaborated with Mazzucco, and cites Condo as his favorite artist. Gazing for hours at a RETNA painting in his home, he began copying it over and over to hone his skills, augmenting his education by watching videos about painting.

Painting daily from his home studio, Valencia also studies art history and sculpts at home, developing an interest in a wide-range of artists such as Gerhard Richter, Vincent van Gogh, Amedeo Modigliani, Francis Bacon, and Michelangelo. Valencia said he is drawn to artists for their unique style. He often begins with small sketches, but lets his creative force take over once he begins work on a canvas, relying on his color wheel to guide him. Ideas strike him as he’s about to go to sleep, and he will get out of bed at 10 p.m. to paint. Painting several canvases at any time, Valencia completes his works within about four days. He’s eager to visit the Louvre Museum in Paris to view Leonardo da Vinci’s Mona Lisa. “I just want the world to know my work,” he said of his primary goal.